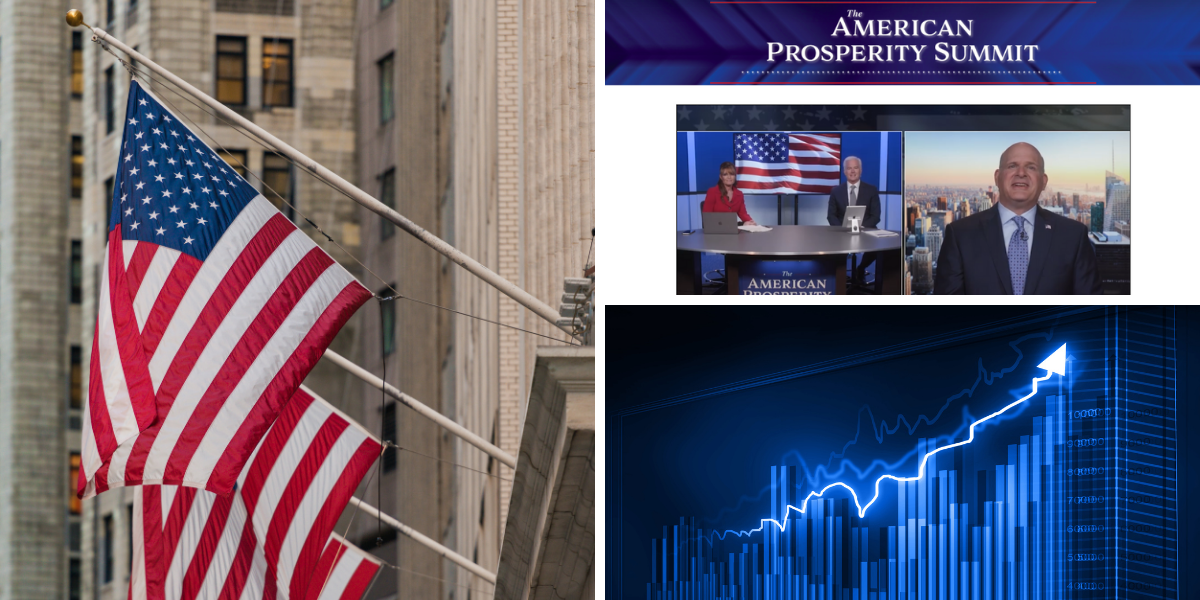 The American Prosperity Summit is a recorded event with Sarah Palin, John Burke, and Charles Mizrahi, that showcases Mizrahi's investing expertise and claims to have the goal of helping Main Street American's make $1 million.

Sounds amazing, but don't buy into anything just yet! It's all a promotion, and in this review I'll be exposing Charles Mizrahi's "number one stock" that he thinks everyone should go out and buy today for the potential of making 300% profits.

Let's begin by going over the teaser..

The agonizingly long 1+ hour presentation is supposed to appear as some sort of news interview, but is really just a promotion by the Banyan Hill Publishing company for one of Charles Mizrahi's investment newsletter services... 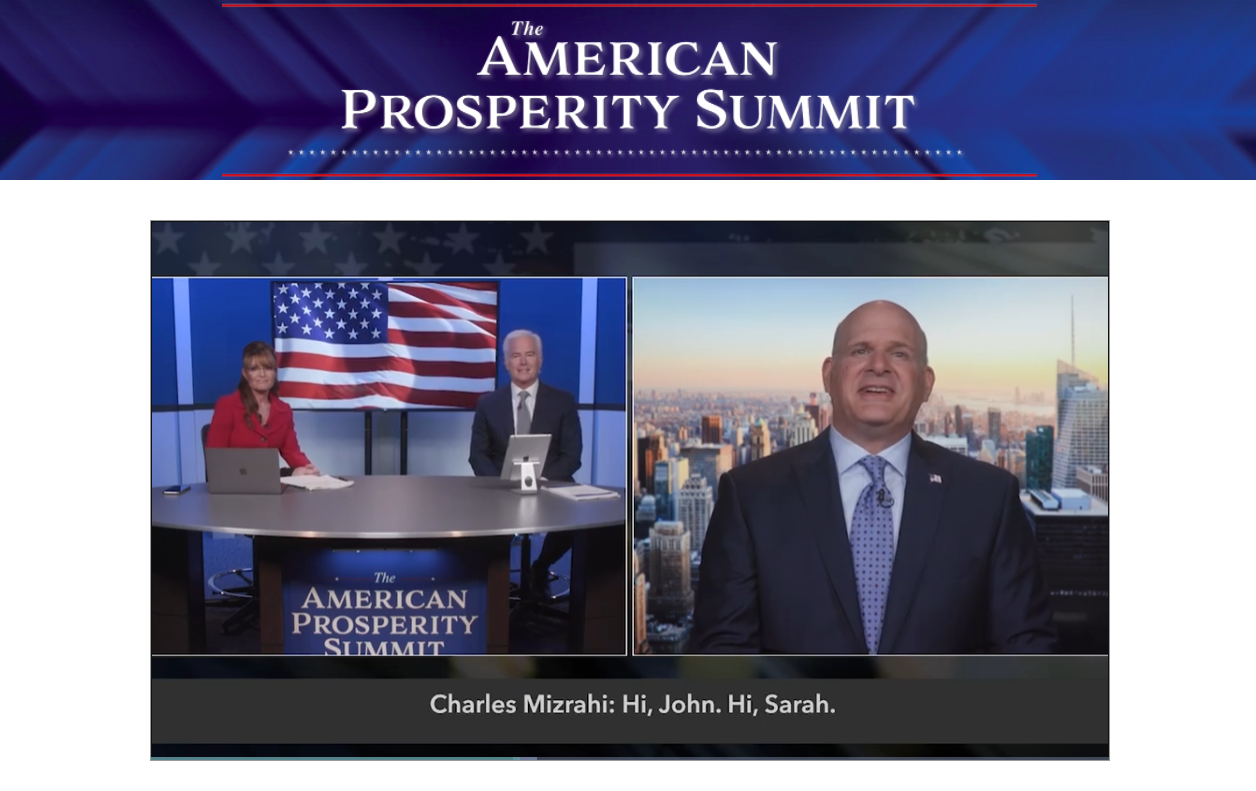 The woman in the presentation needs no introduction. It's ex-Alaskan Governor Sarah Palin, and I must admit I was pretty surprised to see here here, although I have come across similar situations in the past, such as when Bill O'Reilly was featured in "The Smartest Investment Strategy of All-Time" presentation with Alexander Green.

John Burke's role in the presentation was that of a reporter, and it was Sarah Palin doing most of the talking.

She talks about how she often talks with your normal Main Street Americans and finds that they are struggling financially, even though they have done everything they were "supposed to do", such as save money and invest it wisely. And it is because of this that she and John Burke are putting on this special presentation, so we are told.

Sarah Palin wants to invite viewers to join here on "a mission to help you, and every other American who watches this event, make $1 million as the gains stack up, year after year after year"... 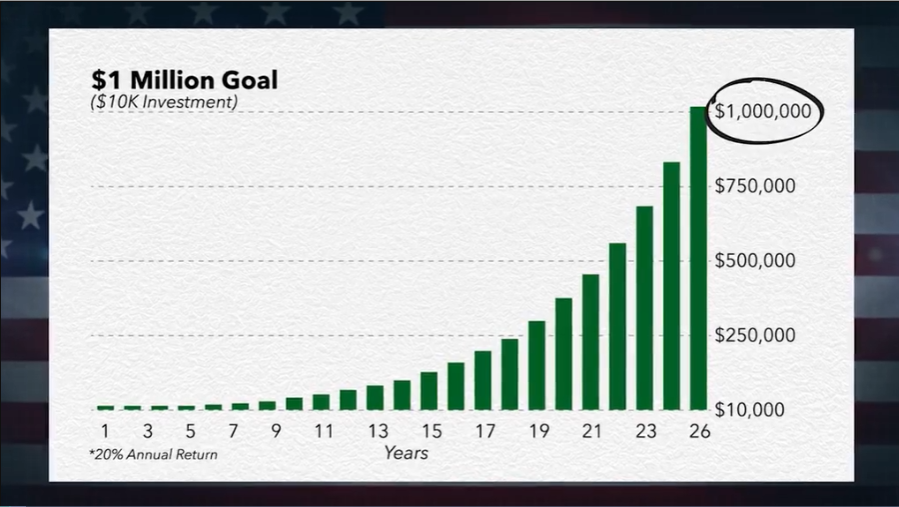 It seems that viewers will be getting information on or access to some simple strategy that she claims only takes her 10 minutes a month to use, which is also called a "rogue solution" and a "secret weapon" to help the average hardworking American come out on top financially.

But Sarah Palin isn't the one behind it. She's just using the "secret weapon" that was created by ex-Wall Street veteran Charles Mizrahi, who is introduced in the presentation at a later point. She tells viewers that she doesn't have the time to dig through quarterly reports and look at companies' profit margins, and so she follows Mizrahi's advice.

I'll be talking more about this "secret weapon" in a bit, and I'll also be going over what Mizrahi is calling his "number one stock" to buy today, which he thinks will "soar over 300% or more over the next few years".

Don't fall for the hype..

It all sounds amazing... the potential of 300% gains on one stock and the goal of making $1 million in the coming years...

BUT, don't fall for all the hype. At the end of the day this is all a promotional video, and you can't trust 100% of what you hear.

Take for example the testimonials we were shown in the presentation. Below is an image of "Paula B", who supposedly made a 95% return on her investments following Mizrahi's advice... 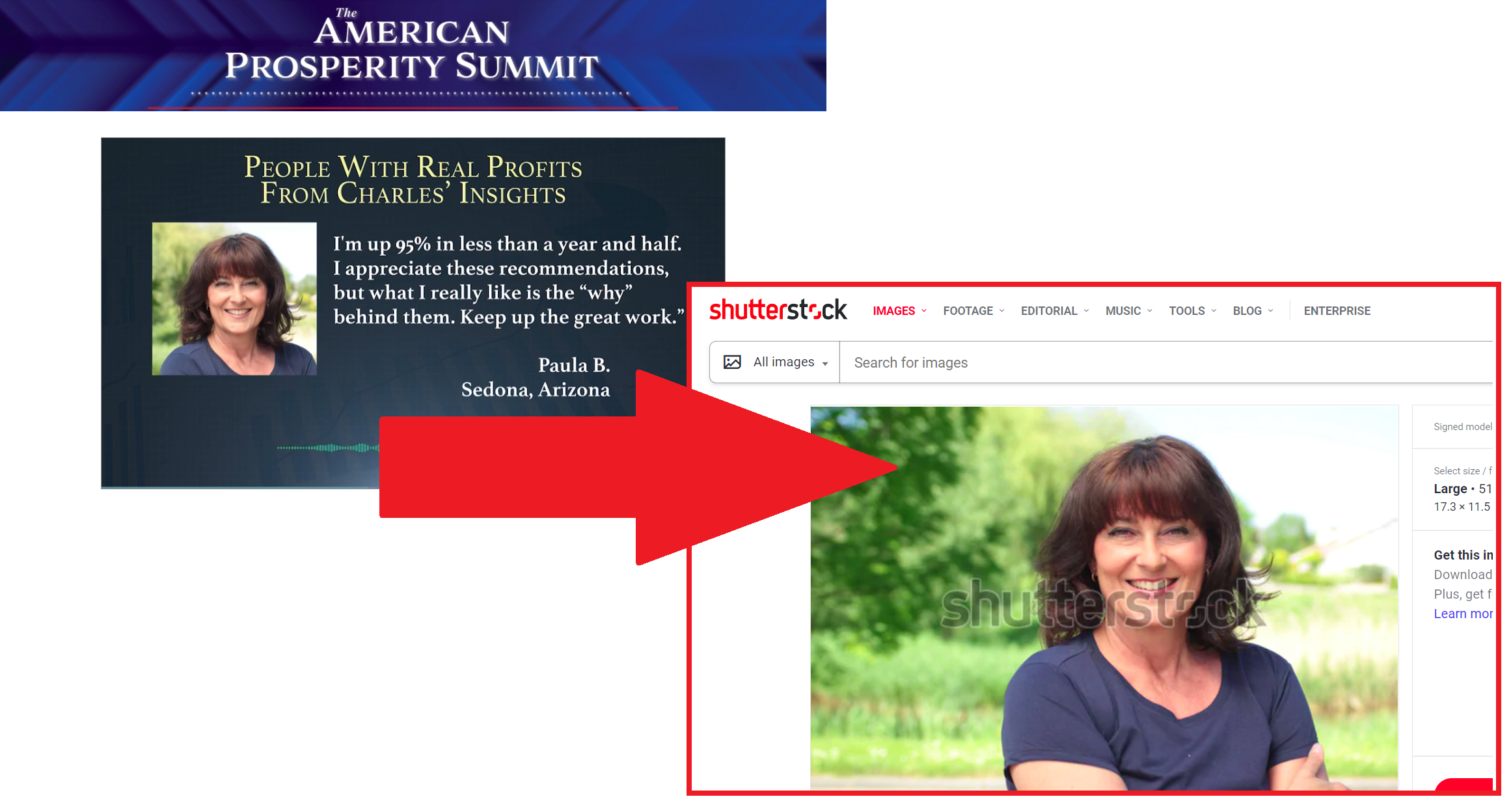 As you can see, the image of this woman is fake. It's a stock photo that I was able to find available for purchase on ShutterStock (and this is just one example).

The presentation, as expected, all ends in a sales pitch for Charles Mizrahi's Alpha Investor Report service, which I'll talk more about in a bit.

One of the main selling points is that you can get his "America's Alpha Stock" report... 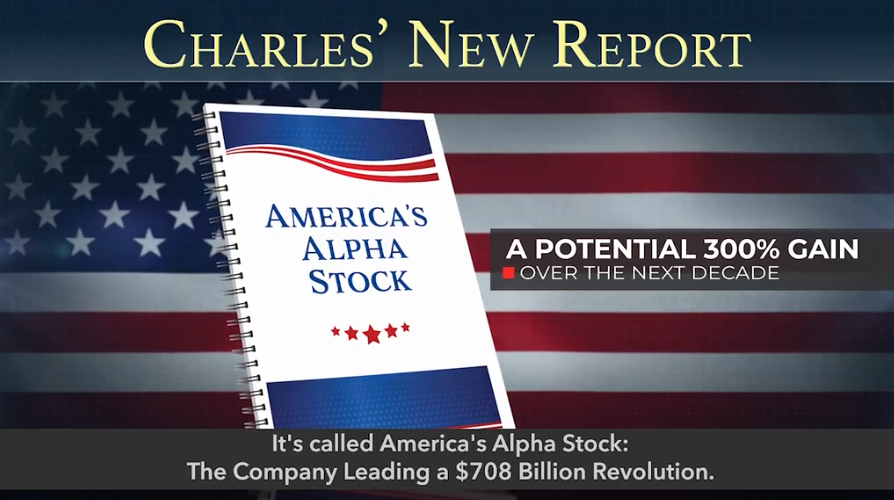 This report provides the juicy details on his "number one stock" pick, a pick he thinks will provide investors with a 300% gain.

BUT DON'T BUY INTO ANYTHING JUST YET! I'll be exposing this stock pick shortly, for free (that's what we do here at Green Bull Research).

The People Behind It

As we know, Sarah Palin, John Burke, and Charles Mizrahi are the people in the presentation. John Burke is just a journalist/interviewer in it all so we won't talk about him, but let's talk a bit about Palin and Mizrahi.

Who knows how much Sarah Palin got paid to be featured in this promotional video. She claims to have been using Mizrahi's investment service herself before all of this, but I highly doubt this is the truth. She's the ex-Republican Governor of Alaska, believes in good old fashioned hard work to achieve the American Dream, and has developed quite a following because of this. This is the reason I'm guessing Banyan Hill Publishing (the company Mizrahi works for) went out to bring her on-board for the presentation.

Charles Mizrahi is the main person we need to talk about here because he's the one behind the investment advisory service being sold. Mizrahi, as was mentioned many times, comes from a Wall Street background. He started off his life as a middle-class American, but worked his way up to being ranked as the No. 1 commodity trading advisor by Barron's as well as the No. 1 performing market timer in the US for a period of time. On Wall Street he also managed money for large investment banks such as Goldman Sachs, Citigroup, and Credit Suisse.

With over 35 years of experience Mizrahi definitely knows a thing or two and has a good track record. Just take what he says with a giant grain of rock salt. Hyped-up teasers are the norm here, as was evident from his "No. 1 Marijuana Stock" teaser and the one for his AI stock pick.

In the teaser there was a lot of talk about the "Secret Weapon" Sarah Palin has been using to make tons of money investing.

She says it is simple, fun, and profitable... and she supposedly made more money in 2 weeks with this than most investment experts make in 2 years... 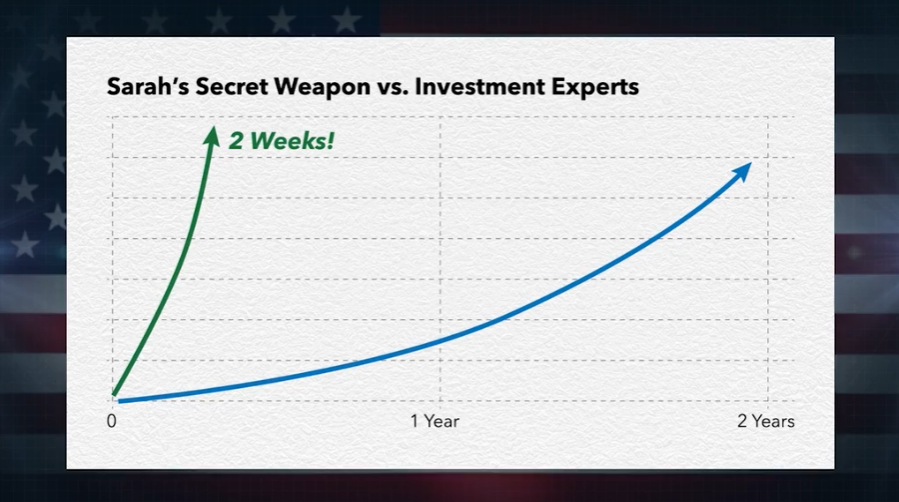 As we know, this "secret weapon" she's talking about is Charles Mizrahi's advice. So let's talk about how Charles goes about recommending stocks to his subscribers.

He says he only buys "alpha stocks" and claims they "have 100% profit potential baked into the price".

But how does he find these stocks... which are the ones he's recommending to subscribers?

Well, here's the 3-step strategy for finding alpha stocks that we were told:

Stock recommendations based on this criteria being vetted by a Wall Street veteran sounds pretty good... and it's also worth mentioning that at one point in the presentation it was stated that he made 48 winning recommendations in a row, and I also know that his investment newsletter services receive some pretty decent reviews from subscribers overall.

This is the service that the whole "American Prosperity Summit" promo video leads up to. In a nutshell, Alpha Investor Report is a follow-along newsletter advisory service by Charles Mizrahi. Subscribers are told what to buy and when, and are given all the details on why Mizrahi thinks you should buy.

Here's a breakdown of what you get if you sign up. 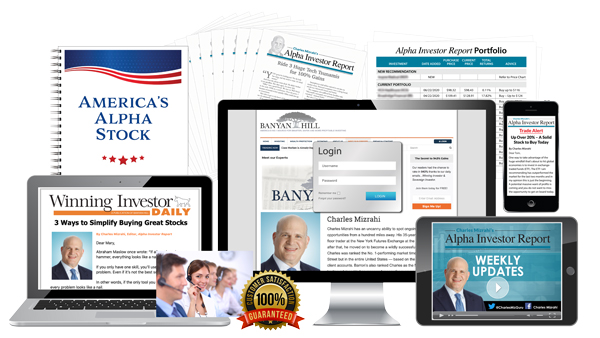 And now finally, what you've probably been waiting for this whole time... let's expose the #1 stock pick that was being teased.

To lure people even more into his newsletter advisory service, Mizrahi has his "America's Alpha Stock" report that he's giving out to new subscribers.

Charles claims he "hasn't been this excited about an investment since he told people to buy Microsoft before it soared 800%"... 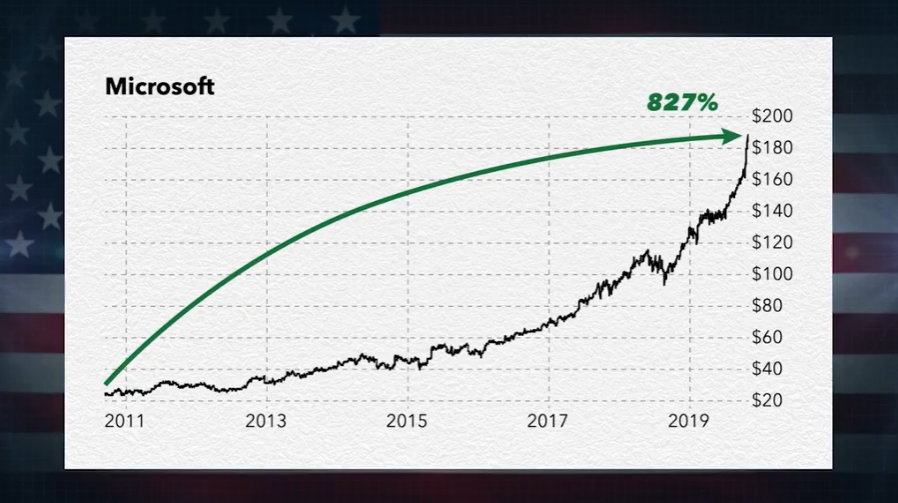 Really now... so should we expect this stock to soar 800%? Well, he teases this new opportunity as a potential 300% gainer... which is weird because he claims to be "more excited" about it.

But anyways, let's first take a look at the clue and expose this sucker. What we are told is that:

Any guesses as to the name?

Did you just say Tractor Supply?

Well, if you did then you'd be correct. Yep, that's right, Tractor Supply is his top stock pick - the rural retailer that sells everything from pet food to lawn equipment.

All the clues match up nicely.

Tractor Supply (TSCO) it is. But is this really the amazing investment opportunity Charles hypes it up as being?

I certainly wouldn't, but it could be a solid portfolio pick.

Tractor Supply has good financials with steady growth over the last five years. And what you may find surprising is that they reported record sales in the second quarter of 2020 when most other companies were suffering severely from the COVID pandemic.

It's certainly not going to make you rich quick, but this could be a good pick for value investors... and it's a company you can feel proud owning.

Well that was a heck of a lot to cover, so let's do a quick recap and breakdown of what we just went over.

And there you have it folks! You're welcome!

I hope this review has provided you with some real value and helped you out some.

As always, let us here at Green Bull know what you think of all of this. Is this a good stock pick? Does Sarah Palin really use Mizrahi's advisory service?